Have you been using Records in C#?

Do you use them for immutability?

Are you sure they are immutable?

Do you use Lists?

So, let me tell you that you may have some unexpected mutable ones.

Good news! It’s not your fault.

The promised immutability in one line

Before you keep reading, let me address the elephant in the room. You may be thinking: "Guilherme, immutability in .NET is a lie".

Let me tell you, my friend, that's a different discussion.

If you don’t value the way .NET addresses immutability, you can stop reading here. This post is not for you.

If you are reading this line, thanks for not leaving the boat. I promise you that there’s value in Immutable data structures in one line. How can you not love it? 😍

Besides the people that stop reading two paragraphs above, I only know one person who doesn’t make a big deal about it. It’s my daughter. She’s 5.

They told us that Records would be simple. But Records require an extra level of attention. What wouldn’t be a problem if our attention wasn’t devoted to Twitter or Reddit.

You know that the way you declare them can make them mutable. But, once you master it, it doesn't stop there. 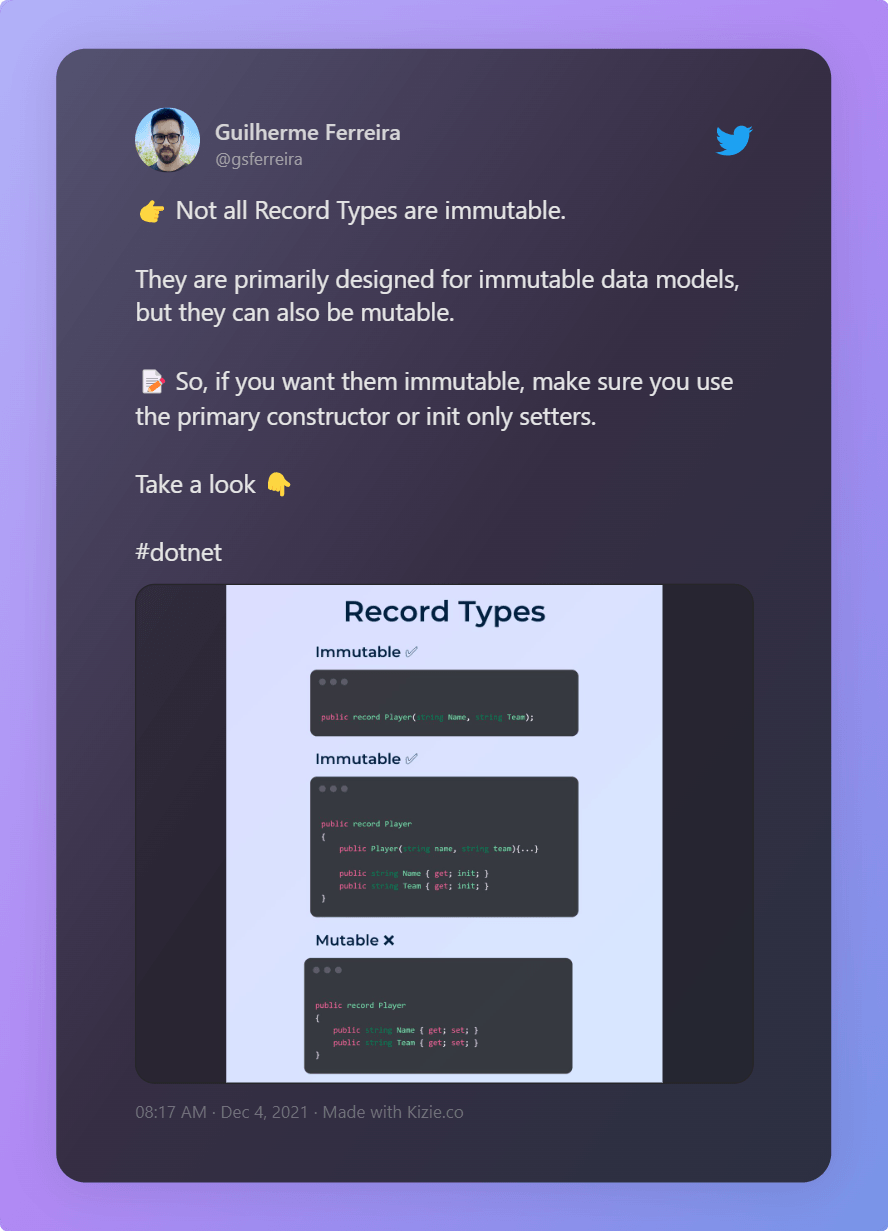 The question stands. How can you fulfil the prophecy of immutable data structures in one line?

You can do it with a simple rule. 👇

Record Properties must be a Primitive, a Record or a Read-only/Immutable collection to preserve immutability.

Simple! Isn’t it? Not as simple as knowing where to click to Google search. But simpler than fixing a bug on a Friday afternoon.

Keep an eye on mutable properties, and it will be fine.

A rule in practice

Let’s see this thing in action?

The idea is simple. You avoid mutable collections and classes with public modifiers as record properties.

Take a look at the following Record.

How can we refactor this into an immutable record?

It’s simple, put a Read-Only or Immutable Array in action.

Putting it in action

It may look like common sense, but it's easy to go undercover.

Now that you know the blind spot, it’s time to take action.

Do you have Records in place? Go check them to see if:

Swap them with an Immutable Array, Read-Only Collection or Record.

After that, you just need to do one more important thing. Follow me on Twitter (@gsferreira) and let's keep in touch. 😉