How to apply Hexagonal Architecture with .NET

Hexagons, Ports, Adapters, you know all of that. What you don't know is how to put it into practice. Don't worry.

That's normal. My hundreds of hours of watching MasterChef don't make me a Chef 🧑‍🍳. But they served me well to know what a Sous Vide is.

It's what we are going to cover here. Not Sous Vide. Hexagonal Architecture. Let's focus.

If you are not familiar with Hexagonal Architecture, don't worry. I got you covered.

Take a moment to check this post or this video where I explain the concepts. Go and make sure you get back here. This party can't continue without you. 🥳

In this blog post, we will look at the Project Structure for a .NET Solution following Hexagonal Architecture.

For the sake of the exercise, we will be imagining a Book Tracking API that needs to store data on PostgreSQL and publish events to Apache Kafka every time a book is read.

If you think about it, Hexagonal Architecture is mostly about the Dependency Rule. Dependencies should point inwards.

Knowing that I have an important disclaimer to make. Here it goes.

What you find here is my recommended approach. Knowing that Hexagonal Architecture will be most useful on complex projects. But also knowing that mistakes happen. And not every team has a squad of experts or ninjas 🥷 (unless it's a Japanese company). This is a highly opinionated post based on my experience.

As I said, Project and Folder structure doesn't matter, but I prefer to use different projects for the Core Application (the Hexagon) and each Adapter technology.

Why? Not because I like to wait for my IDE to load the solution, but because with different projects in .NET it becomes easier to enforce the dependency rule.

You may have noticed that I said: "each Adapter" above. Yes, I mean one project per technology Adapter.

In Hexagonal Architecture, Adapters should not know each other. Only then it's possible to swap Adapters with confidence. One at a time. So, you don't want your API Adapter calling on your PostgreSQL adapter once a call is received. Your Core Application should always mediate that.

In the center of your application, you will have your Core. The Core doesn't depend on anything. No Adapters or Technologies are known. The Application Core (aka Hexagon) will host all business logic and Ports.

Note: You may reference utility libraries for sure.

So, we create one project on the Core?! Yes and No. Hexagonal Architecture says nothing about how the Core should be structured. We only know that the Core exposes Ports to the outside world. Beyond that is up to you.

Often, 1 is enough (Core). If you want to follow an approach more in line with DDD, you may want to have 2 ("Core.Application"" and "Core.Domain"). I prefer to start with Core and only split if I have a strong Domain or I need to share Domain concepts with other applications.

Note: Make sure that you use the Public accessor modifier carefully. Everything you expose becomes a contract with your adapters.

You need to identify the Primary/Driving Adapters and the Secondary/Driven Adapters.

Primary/Driving Adapters are all those Adaptors that enable an actor to communicate with the Core Application through a given port. Examples: REST API, Web Client, CLI, Message Handler, etc.

Secondary/Driven Adapters are all those Adapters that the Core Application calls to communicate with the outside world. Examples: Database, Message Bus, SMTP Server, etc.

Identify those Technologies/Delivery Mechanisms and create a project per each. To me, this is the right balance between too many projects and too few to implement Hexagonal Architecture.

Make sure you follow a convention when naming Adapters. It's important that when we see an Adapter, we understand his role in a fraction of a second. As explained in Screaming Architecture.

If we think about our scenario, we know that we have an API that needs to store data on PostgreSQL and publish events to Kafka, so our adapters will be:

🧪 The most important part: Tests

Knowing that you should create one Testing Project for your Core and one per Adapter.

If you want to go deeper on a Testing Strategy, watch my talk at NDC Porto 2022.

Something along the following lines: 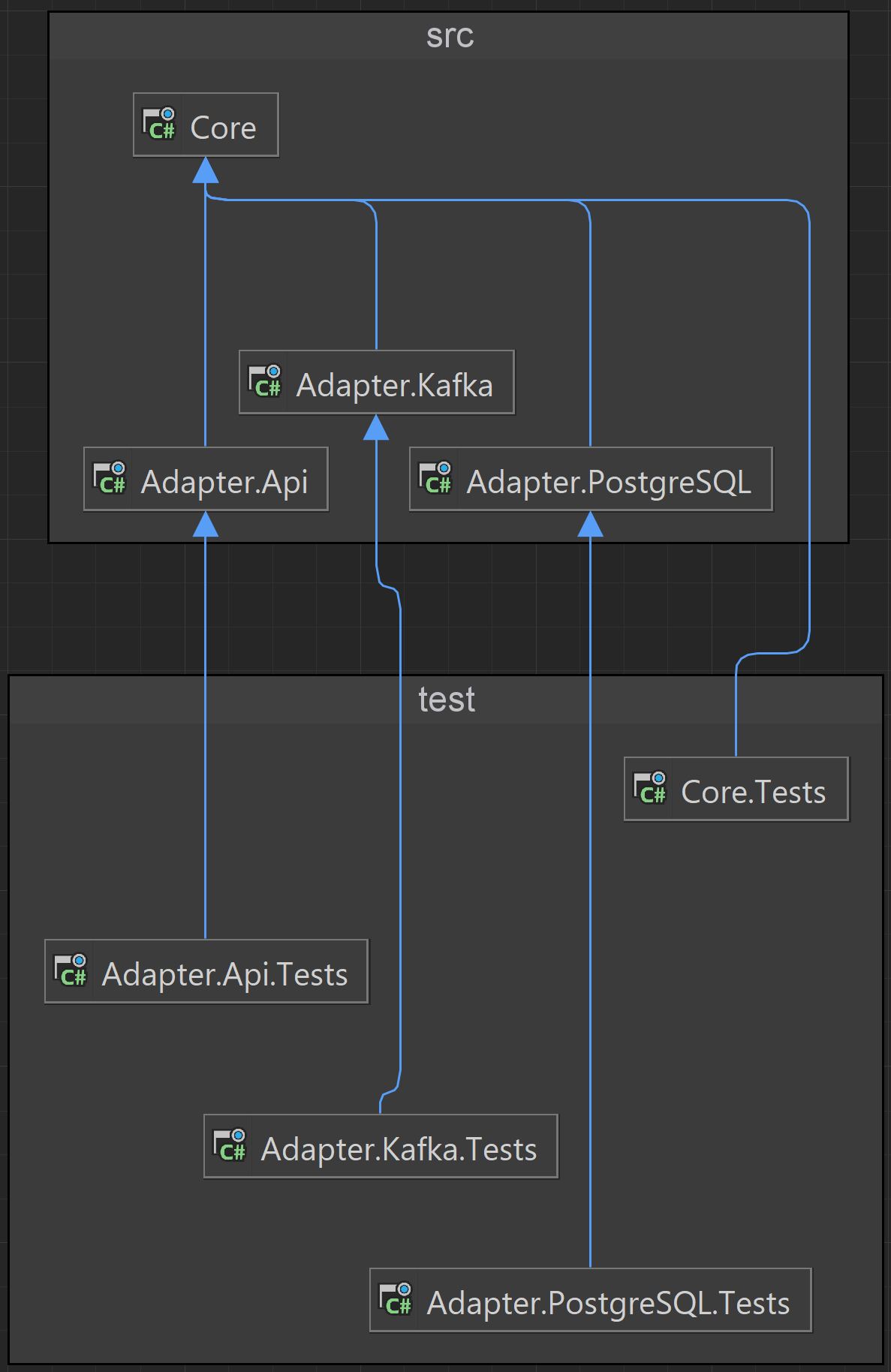 Once you start adding your ports and configuring the Dependencies, you will see that your startup project will depend on many projects.

As I explained, Adapters should not know each other. That can be hard for your application Host / Main Component / Composition Root / Startup. That project needs to perform the Dependency Configuration, so it needs to know the other projects. We know that when we create an MVC project, as an example, the startup code will be there. That can make our life harder.

There are a few options to accomplish that, but they bring an extra level of complexity to the solution. I will reserve that for another post. I promise, my friend. In the meanwhile, you can either:

I hope you find this post useful and that it contributed to a clear vision of what Hexagonal Architecture is.

Before you go, I have to say this once again: It's not about the Projects. It's about the Dependency Rule.

Let me know if you want to see more about Hexagonal Architecture. You can find me on Twitter (@gsferreira).

I will see you soon. In the meanwhile, just keep things simple.