Finding .NET Transitive Dependencies and Tidying Up Your Project

Do you remember DLL Hell? 😈 Yes, me too.

If you don't remember, I'm happy for you. No Developer should suffer like that.

Unfortunately, NuGet Packages and References can be (rarely) a new form of Hell. A soft version of Hell, let's be honest. Not the same type of Hell from node_modules. 🤪

When solutions grow in size, it's common to see projects referencing multiple versions of the same package or duplicated references.

Today, I want to tell you about Snitch. Snitch is a simple .NET tool that:

"help you find transitive package references that can be removed."

Let's start by defining what a Transitive Package Reference (or Transitive Dependency) is.

A Transitive Dependency is a dependency induced by the dependencies of the direct references of that project.

Let me give you an example.

Now we know what Transitive Dependencies are.

A question still remains: How does that contribute to Dependency Hell?

This time, Project A will depend on both Project B, and C. Project B and C don't know each other.

Now imagine you have Newtonsoft.Json version 12.0.2 installed in A, B and C. Next time you need to update it, you update on A and B. You completely forgot C. That can lead to a mess.

You probably noticed in the example above that we not only have a problem with having multiple versions of the same package, but we also have a dependency that can be removed since it's already a transitive dependency.

We are talking about Project A referencing Newtonsoft.Json as well, where its dependencies already reference it.

If you like to keep things clean 🧼 and tidy 🧹, I bet that now you can see the value of it.

The best part is that Snitch is simple and frictionless.

You just install the tool and run it.

To install, it's a simple dotnet tool. Once you have .NET CLI installed, just run:

Then, using the terminal, navigate to the folder of a .NET solution and run:

You will likely see a beautiful result like this: 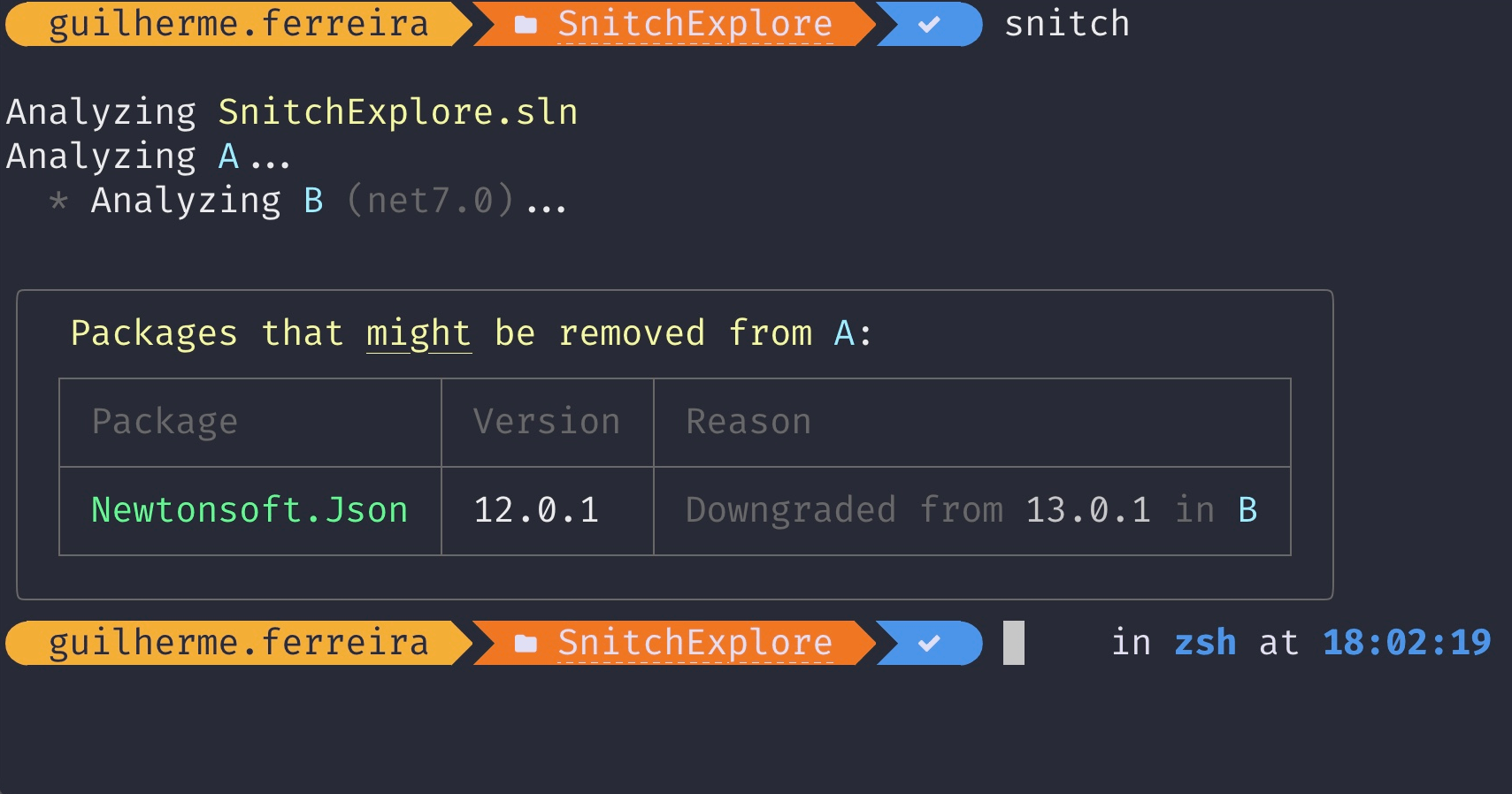 Out of curiosity, Snitch has this elegant user experience since it's based on Spectre.Console. Go check it out (after you finish reading) and give it a start on GitHub. Patrik Svensson has a track record of awesomeness ⭐.

Now that you have executed it, you can clean your solution. I bet you have found some things that you were not aware of.

🤞 Hope and Wrap Up

Like anything that Patrik Svensson does, this project looks amazing.

There's only one thing that I would love to have here. I would love that Snitch could consider the dependency tree of installed NuGet packages. So, when you install "Newtonsoft.Json" (as an example), Snitch would be able to know that you are depending on version "1.x" of "System.Runtime.Serialization.Primitives" and use that information to help you out.

Even without that, it's a super helpful tool.

Give it a try. I bet it will be part of your toolbox.

Let me know if you have found it useful, follow me on Twitter (@gsferreira), and let's keep in touch.